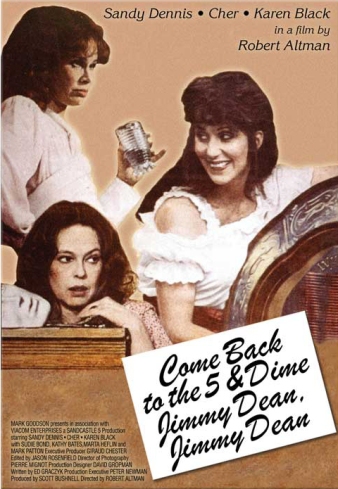 I had not even applied to film school when Come Back to the 5 & Dime, Jimmy Dean, Jimmy Dean was first released in 1982. Yes, by 1983 my friend Rebeka had told me it’s a “must see” and without a doubt those early film projects of mine that suffered from cliche and flat dialogue would have been much improved had I listened to her. So 34 years later I come to realize, some films are timeless, beautiful, and capture simply and perfectly who we are in our often flawed human eloquence.

Robert Altman’s (M*A*S*H, Nashville) period piece guides you back to the 80’s, 70’s, 50’s.Slow moving, as compared to recent films, bereft of CGI, digital stereo sound, and the machine gun type film editing of modern days, Come Back to the 5 & Dime, Jimmy Dean, Jimmy Dean is by far one of the most, beautiful 1 hours and 49 minutes of recent memory.

In fairness, the film’s success is in part due to Ed Graczyk’s play writing skills, that sets the wistful stage in the ageing 5 & Dime Woolworth’s in Texas, on the 20 year anniversary of the Disciples of James Dean Fan Club.

As each member returns decades later, they bring with them the pain of the past coupled with the angst of the present. Who have they become over the past 20 years? How will they been seen by the others? How will they see themselves? Perhaps the lesson here is looking the other way, doesn’t necessarily take the pain away. At least not all the pain. Sissy (Cher) is awaiting her husband’s return, Mona (Sandy Dennis) continues to look after her son, a painful reminder, perhaps penance for teenage love, of years ago.

Yes, she was chosen among many to continue Dean’s lineage. There is Edna (Marta Heflin) who is simply dumb, but doesn’t mind, in her own way perhaps the happiest of everyone there. Other characters (Kathy Bates, Karen Black, Sudie Bond) take part in the reunion to share their stories, but if I revealed much more, it would rob the viewer of allowing the remaining characters speak their own truths. But do listen to these women when they speak as their words are poetic, again their lives wonderfully flawed but redemptive. Cell phones and laptops off. Listen carefully, it will remind you of someone you know. 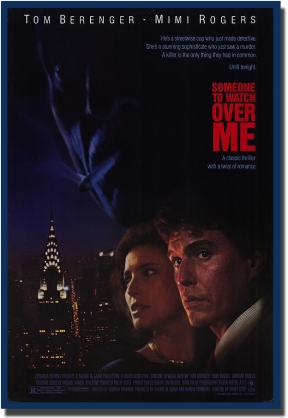 For a film made over two decades ago, Ridley Scott’s work holds up admirably as it swells with actors who went on to become solid names in Hollywood— Tom Berenger (Training Day), Andreas Katsulas (Babylon 5),  Lorraine Bracco (The Sopranos), and Mimi Rogers (Austin Powers, X-files, etc).

Mike Keegan (Berenger), plays loyal husband, father and police officer from Queens who has just been promoted to detective.  The opening scene tells you more about his life than any amount of dialogue ever could as his uniformed officers throw him a party to mark his promotion to detective and transfer to a precinct in Manhattan.  He kisses his wife Ellie (Bracco), he tells her not to smoke, then smokes himself, he hugs his son—in short we see a young man at the pinnacle of personal life and career.

On the other side of town is socialite, Clair Gregory (Rogers)—truly beautiful, elegant, intelligent and sophisticated, and the life of a swanky Manhattan party. Like Mike’s character, we know her from the people with whom she chooses to surround herself. Neither Mike, nor Claire could ever imagine what their two worlds would possibly have in common, except maybe for fate. That night Claire witnesses a murder by gangster and the film’s psychopath, Joey Venza (Katsulas).  Barely escaping with her life and her designer dress and jewelry, Claire becomes the only witness to the murder, and newbie detective Mike is assigned to watch over her.

What could have been a run of the mill “witness” film, instead becomes a rather complex drama/thriller about divided loyalties and…well… love.  The film works in part due to the excellent rapport  between Rogers and Berenger.  There really is chemistry between them, yet there also is an undeniable bond between the detective, his wife and his young son.  Eventually the Berenger character must make a decision, any decision while trying to keep his heart in one piece, his family together, and his witness/lover alive.  Needless to say, something has to give and when it does, it causes a cascade of events which Mike is helpless to prevent or stop.

Director, Scott uses all the film’s mediums to the fullest— the decadence and arias that fill Claire’s penthouse apartment,  the title song by Roberta Flack as the camera pans across the New York City night scape in the opening credits, all of these elements add up to a memorable, poignant thriller.  An oldie, but a goodie.  As for Scott’s most recent film, Prometheus…well, that’s another story, but not nearly as satisfying.